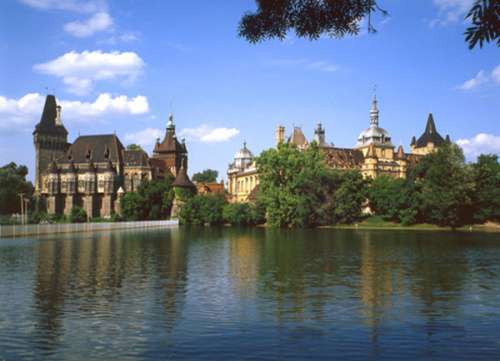 Behind the Heroes' Square there is a large park, the City Park. Used to be a hunting area of the Habsburgs. Was drained during the reign of Maria Theresa and it became a large park. There is an artificial lake used in winter for skating and in summer for rowing. Behind the lake we have a castle. From the exterior it looks like the Vajdahunyad Castle in Transylvania; it was named after that because that castle was János Hunyadi's castle. In the interior it contains 32 different buildings, in copy from Hungary. It is today the Agricultural Museum. Behind the castle you’ll find the statue of George Washington erected by the Hungarians of Cleveland.

In the middle of Városliget is the incredible Vajdahunyad Castle, a mixture of Renaissance, Gothic, Baroque and Romanesque styles, designed by Ignác Alpár for the Millennium Celebrations. Alpár’s idea was to illustrate the evolution of Hungarian architecture in a single building. Each section reflects an important building; for example, the Romanesque section is a copy of a chapel in Ják. The Museum of Agriculture in the Baroque section is the only part that is open to the public. 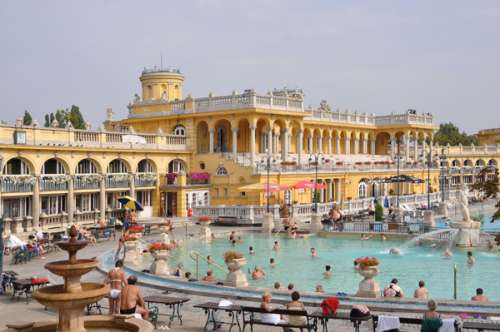 Széchenyi Thermal Bath is located also in the City Park:

• opened in 1913
• there are indoor and outdoor pools
• has neo-baroque style
• the water has a temperature of 76C
• you can swim outside even in winter, because you’re
protected with the hot steam
• the thermal water is excellent for gastric diseases

The Budapest legend, Gundel has been serving fine cuisine since the mid-19th century. The food is classic Hungarian, though often with a modern twist. One of the most famous restaurants of Central Europe.

There are 1.500 different kinds of animals. Was founded in 1865, among the first zoos in Europe. The city’s zoo is one of the best in Central Europe, and is known for its large primate house. There is a children’s zoo where tamer animals can be petted, and various shows are held twice a day. Most of the animal houses are listed buildings, erected between 1909 and 1911 in late-Secessionist style.

In 1891 the circus in Budapest was opened. It was not a tent circus, but a permanent circus giving people a show throughout the entire year. Since then there has always been a circus in the City Park, though the building giving home to the circus today has only been there since 1971. The main programs are from January till August and from October till December. There is a break in September. The audience can usually see 3 main seasons; from January till middle of March, from the beginning of April till the end of August and from the middle of October till the end of December. The building today is in great need of renovation, but inside the show still goes on, so if you just pass by the entrance and sit down you can expect to enjoy the next hours of your life. 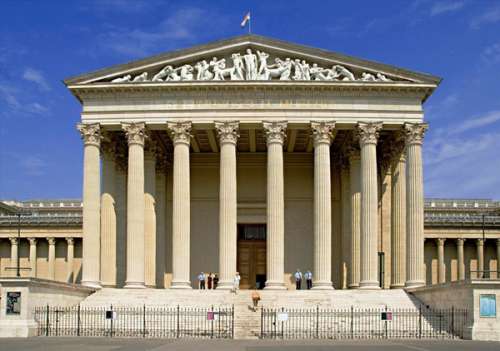 Classical building designed by Albert Schickedanz and Fülöp Herzog. In the tympanum above the huge Corinthian columns of the entrance we can see a completed copy of the western gable group of the temple of the Olympian Zeus which depicts an event from ancient Greek myths, the fight of the Centaurs and Lapiths. Hungary’s largest collection of international art is housed in a 1906 building.

Classical building used mostly for temporary and modern art exhibitions. Hungary’s largest exhibition hall. Designed by Albert Schickedanz and Fülöp Herzog. The building is beautifully decorated with pyro-granite relieves. The Palace of Art was completed in 1895. 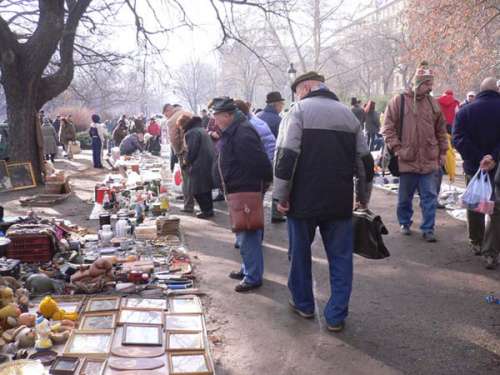 City Park Flea Market in Budapest every Saturday and Sunday. At this flea market you can find souvenirs, old toys, clothes, games for Playstation, Nintendo and other gamestations, movies and other interesting objects. This place will for sure bring forth memories from your childhood! The City Park flee market is open from 8.00 – 14.00 on Saturdays and Sundays.

In 1896 we celebrated the 1000 year’s anniversary of the Hungarian conquest in the Carpathian Basin. After several designs had been made for the Monument, the construction was begun in 1896 and was completed in 1929. In the middle of the square rises a 36-meter high stone column with Archangel Gabriel on top and around the column the equestrian statues of Prince Árpád and the other six tribal leaders on the base. In each hand Archangel Gabriel holds an important symbol: in one, the holy crown of the Hungarian kings and in the other, the double apostolic cross. In between the columns are the statues of the leading figures of the Hungarian history; they are in a chronological order from year 1000 till 1849 and beneath them are relieves representing scenes from the relevant periods of the Hungarian history.

• ruled in the X - XI. Century
• in considered to be the state founder
• converted the Hungarians into Christianity
• in 1000 he got his crown from the Pope Sylvester II.
• is always represented with his crown
• founded ten episcopates
• invited Benedictine monks
• in his relief is the coronation
• is followed by the statue of

• ruled in the 11th century
• was the 2 saint king of Hungary
• under his rule the convention of the Hungarians to Christianity was completed
• attached Slavonia to the Hungarian crown
• fought against the Cumanians successfully
• under the statue in the relief the scene is showing St. Ladislas saving a young maiden from a Cumanian

• attached Dalmatia and Croatia to the Hungarian crown
• consolidated the authority of the Hungarian crown over Slavonia
• was a very high-educated person; that’s the reason he is usually represented with his books
• in the relief he is shown prohibiting the burning of witches

• ruled in the 13th century
• issued the Golden Charta 1222. The Golden Charta is a collection of very up to date laws which restricted the privileges of the nobility.
• took part on a crusade to liberate Jerusalem but he never reached Jerusalem,
he returned from Italy

• ruled in the 13th century
• considered to be the 2 state founder
• fought against the Mongolians
• during 1241-42 almost the whole country was destroyed
• after the Mongol invasion he transferred the capital from Esztergom to Buda
• under the statue in the relief King Béla IV. rebuilds the country after the Mongol invasion
• in 1301 the Arpadian dynasty died out and the Pope supported the claim on the Hungarian throne.

• was crowned 3 times: In Székesfehérvár (1301), with the St. Stephen’s crown (1309), by the archbishop of Esztergom (1310). If one condition was missing, he would not have been accepted as a king.
• strengthened the feudalism
• issued a new currency on the pattern of the golden
• during that time Hungary was a very rich country, 50 % of the world’s gold production came from Hungary
• the 1st European summit was organized at Visegrád in 1335. The Czech, Polish and Hungarian kings gathered to avoid the customs of Vienna.
• his son, King Louis the Great inherited a very rich country

• was a renaissance king
• during his time Hungary flourished
• the country's population rose to 4 million (the country was much bigger than today)
• introduced very high taxes and consolidated the state budget
• royal revenues quadrupled that made it possible to call up a mercenary army loyal only to the king, otherwise known as the 'Black Army' for the black uniforms they wore
• made efforts to create a strong Central-European empire
• occupied even Vienna and for 5 years it belonged to the Hungarian Crown
• introduced renaissance culture
• built a beautiful summer castle at Visegrád with floor heating and suspended gardens
• had a world-famous library which contained 2500 richly illustrated volumes called Corvinas
• during his time the south tower of the Church of Our Lady was built
• in the relief King Matthias is among his scholars

The Turks came closer and closer to the Hungarian borders. In 1526 the Hungarian army suffered a defeat at Mohács, even the Hungarian king died in the battle. Soon after in 1541 Buda was occupied by the Turks. That’s the moment the country fell into 3 parts.

• during his time Transylvania reached its golden age
• introduce state monopoly on gold, silver, salt and wood, so he consolidated the state budget of Transylvania
• sent the most talented young people to protestant universities (to Basel)
• founded a university in Gyulafehérvár which became a center of protestant culture

• led a war of independence against the Habsburgs between 1703 - 1711
• at the very beginning he fought successfully with his 'kuruc' army but finally he failed
• the peace treaty was at Szatmár in 1711
• as an immediate consequence of the peace treaty , fortifications and castles were blown up
• went to exile to Turkey

• was the leader of the revolution and war of independence 1848 - 49 against the Habsburgs which demanded that time a better taxation system, liberation of the serves, parliamentary representation , freedom of the Press and governmental responsibility
• went to America in 1852 to ask for financial support from the American Congress
• in half a year he held 600 speeches

ln front of the Millenary Monument there's the symbolical grave of an unknown soldier in memory of all those who lost their lives for freedom and for national independence.