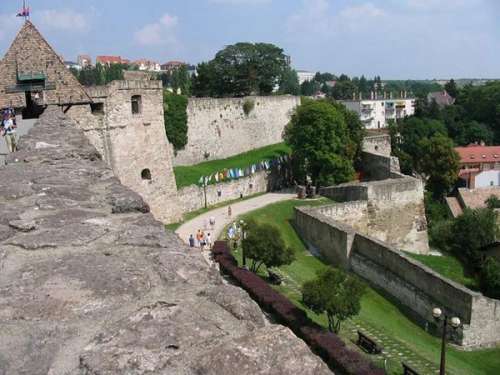 The towns golden area came during the reign of Matthias Corvinus, in the second half of the 15th century, at a time when the humanist Bishops of Eger invested enormous amounts of money in the development of the cathedral town. In 1552 Eger earned its very spacial place in the Hungarian History, at the time, when Istvan Dobo eas the castellan. 50-50 thousand Turkish soldiers surrounded the castle which was occupied by 2 thousand soldiers. After the 40 days lasting siege the Turks retreated, having failed in their attempt to take the castle. The visitor can take a tour in the castle, visit the exhibitions (waxmuseum, art exhibition, museum of history, and so on).
About the city see more under the Wine Countries - Eger. 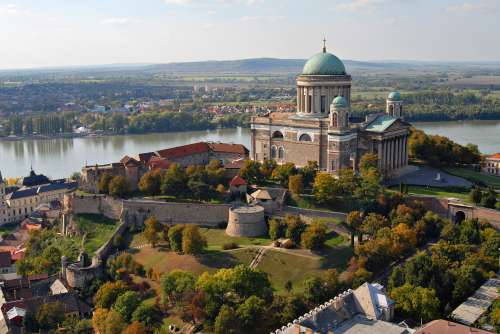 The small town of only 30 thousand inhabitants could be deservedly called as the cradle of Hungary. Approaching it you can see the Esztergom Cathedral, the biggest church in the country. It is about one hundred metres high, the interior diemater of the dome is 33.5 m. Entering the building the visitor is confronted by the largest altar canves in the world. The oldest object in the collection of the Cathedral Treasury is a depiction of the Crucifixion carved in rock crystal and made in Metz in 870. In Esztergom (in the Biblioteka) the visitor can find also Hungary’s oldest book collection which has 250 thousand volumes, including manuscripts and early printed books. 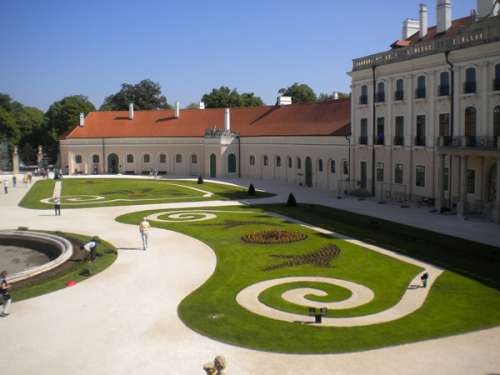 The Castle of Fertod, the Hungarian Versailles, is one of the most beautiful castle complexes in Hungary. Its construction begun in the years of 1720 under tyhe conrol of Prince Jozsef Esterhazy. J Haydn, the last court-composer in the history of music, had been almost two decades in the service of the Prince (the first two permanent theatres were built in the residence of Esterhazy family as well). Now, remembering the older times, every week from June to September, concerts of classical music are given in the ceremonial hall by distinguished domestic and foreigh artists, accompanied by symphonic and chamber orchestras. 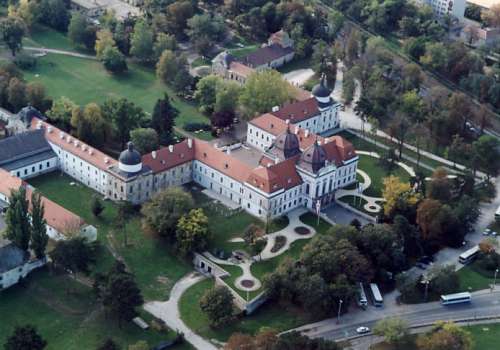 The golden age of this town coincides with the life of Antal Grassalkovich at the 18th century. The Royal Palace (also named as Grassalkovich Palace) is one of the most important and the largest baroque buildings and the in Hungary. In its long history it belonged also to Queen Elisabeth, it was the summer residence of Admiral Horthy’s. The Palace Museum is now complete, the visitors can see the rooms which once were occupied by Francis Joseph and Queen Elisabeth, and the exhibition devoted to Queen Elisabeth. The banqueting halland the courtyard during the summer hosts some important annual events. This town gaves also home to the GATE, the university of agriculture in Hungary. 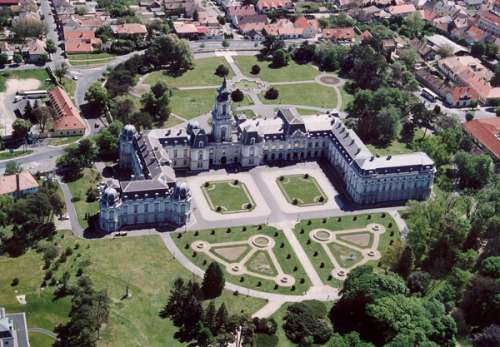 Besides the great swimming facilities which has every town near Balaton, Keszthely is famous also because of its history. The reputation of this town is founded on the activities of the Festetic family. Hereby recently the most popular place among the tourists is the Festetic Palace (built among 1745-1887), which contains hundred and one rooms, and nowadays gives home to an exhibition of weapons belonging to the Hungarian National Museum. Notable is also the beautiful English-style garden which belongs to the Palace. 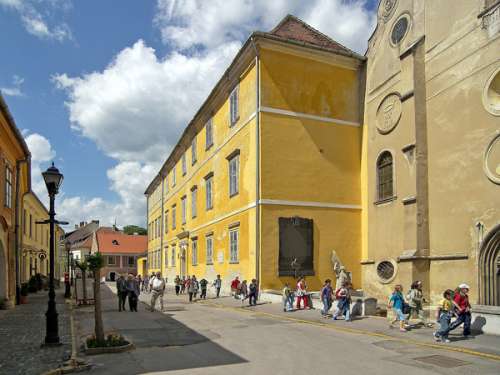 The Koszeg family built a castle to protect the town in the 13th century. The inner castle is said to be the oldest part of Koszeg. The castle now is a cultural centre, especially when the castle theatre is up and running in the courtyard. Here you can also visit the Miklos Jurisics Castle Museum with its local history collection and the unique Grape Book. Koszeg’s town Hall is perhaps the oldest functioning town hall in Hungary! The town has been governed from here continually since the 14th century. The largest building in the town centre is the Gothic revival Church of the Sacred Heart in the main square. 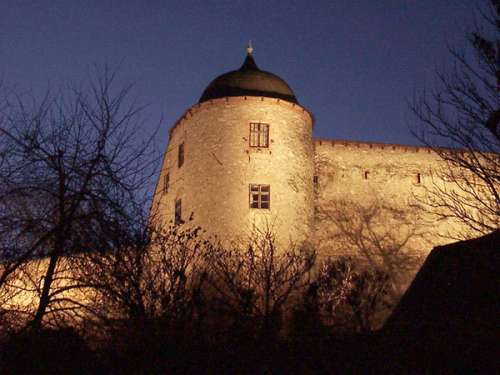 The Benedictine Abbey is situated on the southern foot of the highest peak of the Mecsek region. It was Pecsvarad’s first abbey, whou brought the crown from Rome for Saint Stephen, the first Hungarian king. Stephen then gave his manos house together with all its substantial endowments to the Benedictine missionaries arriving in Hungary.
Festivals: the patronal festiva; on August 15th signals the start of the castle’s Saint Stephen Festival, which lasts up until the national holiday on August 20th. The main festival for the calvinists living nearby is the Luke’s Day, on October 18th. Every other year, in the years ending with even numbers, they hold the Girl Fair, whilst the alternating odd years you can see the Sweet Chestnut Harvest. 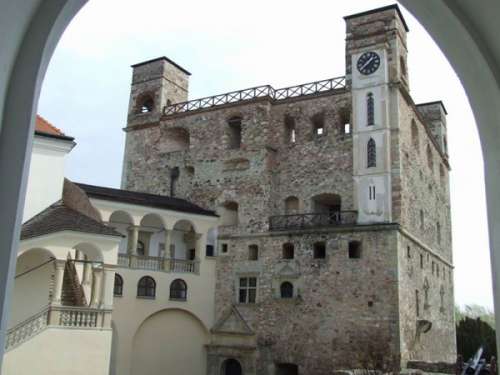 The towns golden age coincided with the Rakoczi family. The castle, which is more a palace than a fortress, is one of the most important Gothic and Renaissance buildings in Hungary. In 1616, the Rakoczi family acquired the palace. Subsequently floors were added to the eastern and southern wings of the palace, followed by the construction of the Lorantffy loggia, the most attractivearchitectural feature in the courtyard. Now the castle gives home to the Rakoczi Museum.
It was 1694 that Ferenc Rakoczi gave a monastery lying within the outer castle to the Trinitarians. The church now functions as a concert hall, music school and exhibition venue. 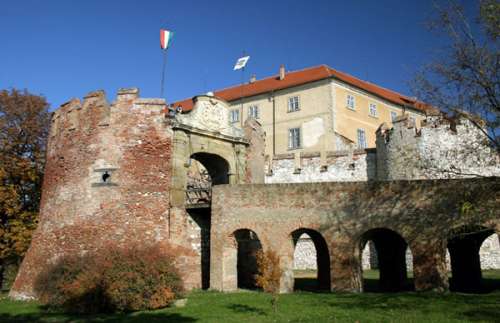 Only a few kilometers from the Croatian border the visitor can find one of the most complete castles in Hungary. For the reconstruction the Society for the Preservation of Ancient Monuments won the Europa Nostra Award in 1992.
The interior of the chapel at Siklos Castle is one of the most beautiful in Hungary. The saints and lords depicted in the wall niches date from the time when the Garai family owned the castle. During the 18th century the Batthyany family remodelled and enlarged the castle in the Baroque style. The castle also contains the Pecs Glove Manufacturing Museum and a permanent exhibition of Istvan Gador’s ceramics.
Every April local artists show their work at the Siklos Art exhibition held in the castle. The Siklos Salon, an exhibition of contemporary art, is held in May. Every other June the National Wind Band Festival is held, and the Siklos Autumn, which includes harvest parade and a folk dance programme is held at the beginning of October. 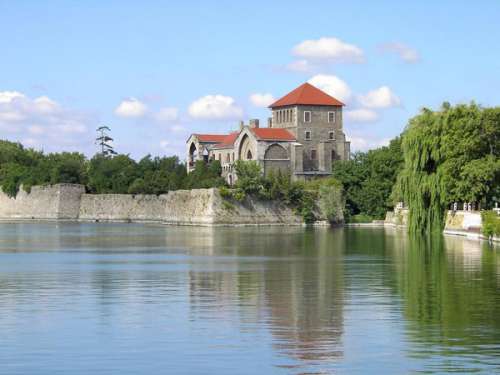 As the historical town of Tata is synonymous with the lake on which is stands perhaps it should be called as the “Water Palace”. Whether one calls it a castle, a palace or a hunting lodge, the fact remains that it was first built by Emperor Sigismund at the turn of the 14th century. By the reign of Mathias Corvinus it had become one of the most beautiful Renaissance palaces in Hungary. Much of what we can see today, tells us about the baroque and romantic periods.
In the castle chapel which stands separate from the palace there is an exhibition of ecclesiastical art featuring altars and sculpture dating from the 18th and 19th centuries. In the past, the lake around the palace, the Lake Oreg, used to be a place to breed fish. Now it is a conservation area, but it is perfect for sailing, cycling around, boating- every sumemr a pleasure boat takes tourists from the castle to the small quay at the far end of the lake.