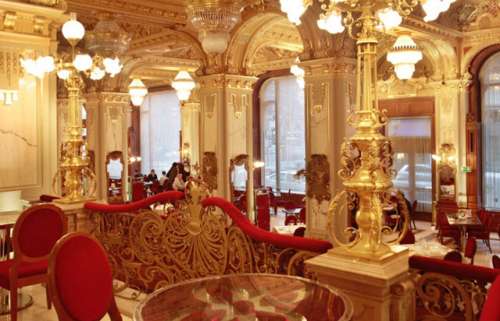 The New York Café has lived through many eras, political systems and historical turning points. Still, it has always been reborn, sparkling and occupied by those who longed for its comforts: artists, members of the nobility and commoners alike. The Boscolo Group has reconstructed it in a way which reflects the tendency to regain its old patina and reputation ranking it as the “Most Beautiful Coffee House in the World”. 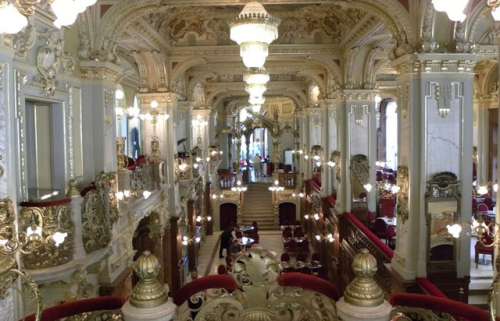 The ceiling is adorned with marvelous frescoes by Gusztav Mannheimer and Ferenc Eisenhut, dating from the mid-XIX century. Sumptuous Venetian chandeliers produce a magical light, and golden stucco work covers the twisted columns: the effect is enchanting. 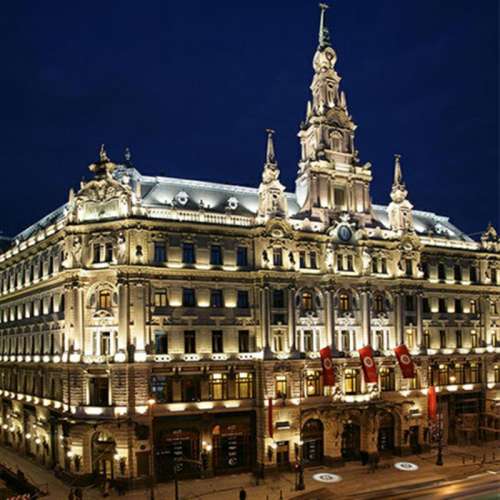 Entering the New York Café means taking a step back into the past: visitors are overwhelmed by the whim, opulence and refinement of the place. The more time spent in these rooms, the more one begins to appreciate the fascination of the Belle Époque. While outside the bronze Luciferes, symbols of artistic spirit, recall the many painters, actors and intellectuals who have always frequented the café, inside one can appreciate both the proverbial affability of the water and the delights offered by barmen or chefs. 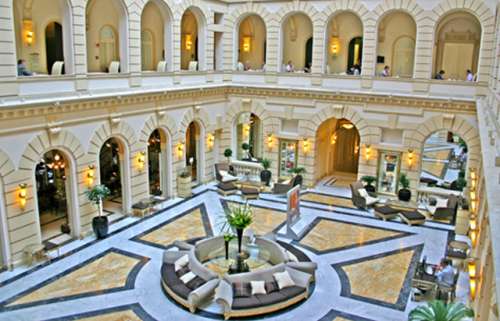 The Boscolo Budapest Hotel, formerly the New York Palace is a luxury hotel on the Grand Boulevard of Budapest's Erzsébet körút part, under Erzsébet körút 9-11, in the 7th district of Budapest, Hungary. Built by the New York Life Insurance Company as a local head office, its Café in the ground floor named New York Café was a longtime center for Hungarian literature and poetry, almost from its opening on October 23, 1894 to its closure in 2001, to reconstruct it into a luxury hotel, as it is now. The café was also reopened on May 5, 2006 in its original pomp, as was the whole building. 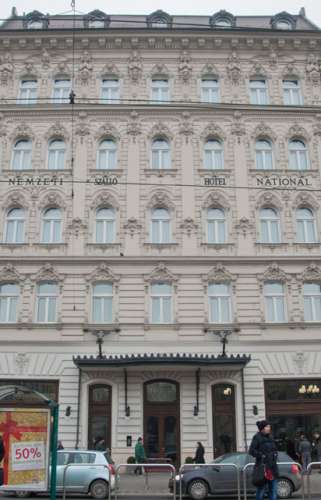 The centrally located (Pest side of Budapest at Blaha Lujza square) Hotel Nemzeti Budapest welcomes its guest from December 2012. Enjoy the artistic spirit of Budapest in this elegant 19th century building historically linked to the local cultural life. This Budapest Hotel is near to cultural attractions and landmarks such as the New York Cafe, Madach Musical Theater, National Museum as well to Music Academy of Budapest. 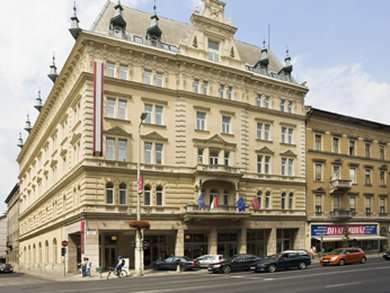 The Hotel Mercure Budapest Metropol is housed in a fully renovated building from the late 19th century on the Pest side of the city center. Museums, Sports Arena, Keleti railway station and the city center are within walking distance. 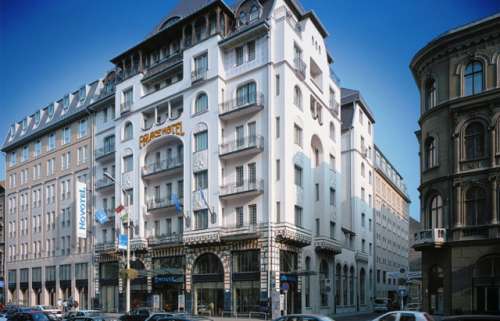 Novotel Budapest Centrum located in the city center, easy to reach hotel. An Art Nouveau style protected historical monument building from 1911, being one of the prettiest in the city. The ancient name Palace Hotel is written on the fascade. The restaurant preserves this tradition in its name Café Palace. 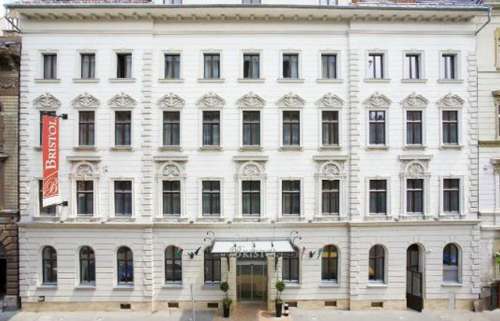 The Three Corners Hotel Bristol is situated in downtown Budapest, in a central location of the business quarter of the capital, near the International Eastern Railway Station and The Central Avenue of Budapest. Saint Elisabeth Church, built on the model of the Church of Marburg which is considered as a masterpiece of the German Gothic style, is located just a few hundred metres away, in Rózsák tere. Offering a gigantic selection of goods, Arena Plaza, which hosts the shopping centre with the largest floor area in Hungary and, at the same time, Central Europe, which houses 200 shops and nearly 30 restaurants, cafés and confectioneries, can also be accessed by a few-minute walk. 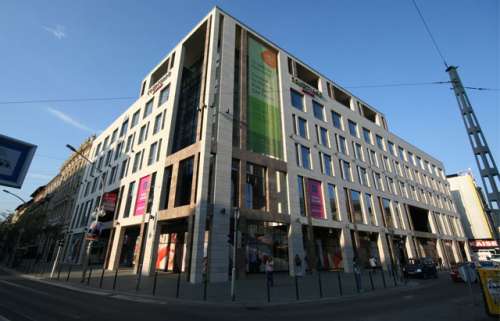 Budapest is cited as one of the most beautiful cities in Europe. Its extensive list of World Heritage sites include banks of the Danube River, Andrássy Avenue and the Millennium Underground Railway, the second oldest in the world. Other highlights include a total of 80 geothermal springs, the world's largest thermal water cave system, second largest synagogue, and the Budapest Parliament building. All these famous Budapest attractions are within easy reach on foot or by public transportation with tram just meters from the Courtyard by Marriott Budapest City Center hotel. 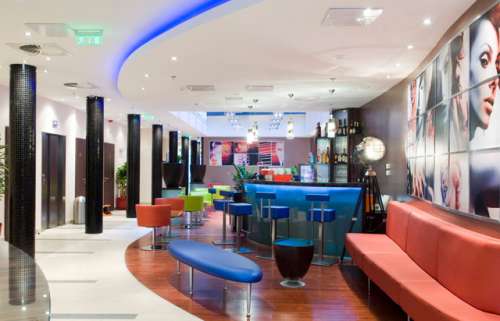 Located in the heart of Budapest in the middle of the colourful and teeming city, between the Eastern and Western railway station and among many famous historical sights, the Soho Hotel in Budapest meets every need of style and elegance in the vicinity of the city’s pulsing cultural scene, entertainment and nightlife. The Danube, Váci street, the Synagogue, the Budapest Broadway, the best restaurants, theatres and concerts are all located nearby, easily accessed thanks to the excellent traffic and public transport in the area. The distinctive atmosphere of the Soho Hotel in Budapest harmonizes stylish comfort with Soho’s sensual elegance. 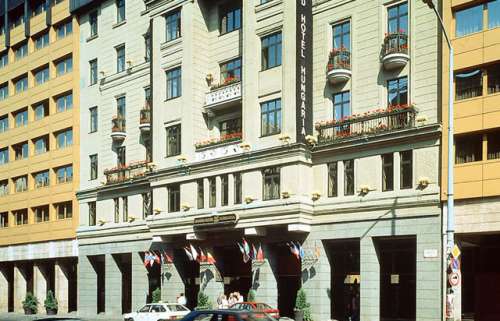 
Best Western Hotel Hungaria is Hungarys largest hotel with 499 rooms. The hotel is only a few minutes walk to all major shopping and business centres and the historical old downtown with the tourist attractions worth visiting.